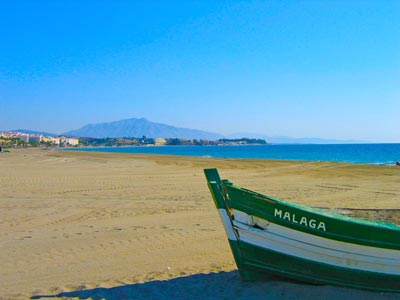 Malaga is a city in Spain in region of Andalusia. It is the second most populous city of Andalusia and fifth largest in Spain. It lies on the Costa del Sol of the Mediterranean, about 100 kilometres east of the Strait of Gibraltar. The oldest architectural remains in the city are the walls of the ancient Phoenician city. The Roman theatre of Malaga, dating from the first century BC, was rediscovered in 1951. With car rental so affordable in the area, it really is the best way to make sure that you see everything that you want to while you are here.

The Castle of Gibralfaro is connected to Alcazaba. It occupies the eastern hillside and looks over the city.  The Alcazaba is a former 11th-century Arab fortress. It offers a fantastic view over the bay of Malaga and was built to protect the commercial port.  It is one of the best preserved structures in Andalusia. The Castle of Gibralfaro was built in the 14th century and is one of the region’s most popular tourist attractions.

The Roman Theatre is located in the old inner city and is near to the Moorish Citadel and Gibralfaro castle. It was constructed under the instructions of the Roman Emperor Caesar Augustus and used until the middle of the third century AD. Malaga is closely linked to the famous painter Pablo Picasso. He was born here in 1881 and his birthplace is located in the Plaza de la Merced in the historic centre and is now a museum, serving as the headquarters of the Picasso Foundation. Tivoli World is one of the oldest amusement parks and is a must for tourists travelling with children. It is 15 kilometres from Malaga and visitors use car hire in order to get quickly from one place to the other.

The Cathedral in Malaga is an architectural peculiarity as it is built on the site of a mosque. The Sagrario church is located next to the cathedral and was built in the 15th century. Like the cathedral, this church is also built on the site of a mosque. Picasso was baptized in this church. Alternatively head over to the Palace Marques de Valdeflores, which is an 18th century building situated in Calle Carreterria. It was residence of the aristocracy during the late 18th century.

The Episcopal Palace is located very close to the Cathedral of Malaga and is a major attraction amongst the visitors. The Customs Palace, built in 1788 is a neoclassical building. It is built like an Italian palace. The town hall of Malaga is also a hit amongst the tourists. It is surrounded by gardens and other landmark buildings. With so much to see it would be a shame to miss out on anything and Malaga car rental can be the solution that you need.

Rentalcargroup.com compares car rental prices for Malaga Railway Station). We work with many car rental companies so the quality of the cars is guaranteed. This way you will be sure to get a rental car that suits you the best and for a competitive price.

Why rent a car?

Want to find the cheapest car available? Rentalcargroup.com offers cheap car rentals for any occasion. From small economic cars to SUV's to 9 seater mini vans. We have the right rental car waiting for you.

Driving around in the city of Malaga Railway Station with a rental car can be a hassle but not impossible. Its a good way to move around but we advise to have a look at the local traffic rules as they may vary with what you are used to. Take in mind that in rush hour traffic can be pretty dense and it can take longer before you reach your destination.

See below last 5 customer reviews. Our customers rated Malaga Car Rental with an average of 6 based on 10 ratings.