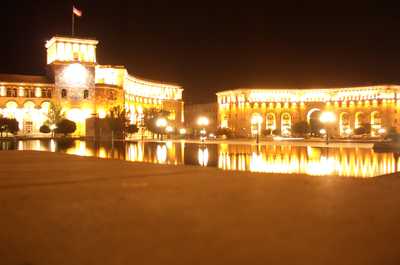 Yerevan is the largest city in Armenia and it is the country’s capital, it is also one of the world’s oldest continuously inhabited cities. The city is situated along the Hrazdan River and is Armenia’s administrative, cultural and industrial hub.  Car hire is recommended to enjoy all the sights and attractions the region has to offer.

The history of the city dates back to the 8th century BC as proven by the ancient city fortress found within the modern day city. Yerevan became the capital city of the Democratic Republic of Armenia when thousands of survivors from the Armenian Genocide found refuge in the area and settled there. The city experienced rapid growth from being a town that was home to a few thousand residents within the Russian Empire, to being the seat of the national government.

The climate of the city can be described as being a humid continental semi-arid climate, with hot and dry summers and cold and snowy winters, as well as an influence of a mountain climate due to the city’s position on a plain and surrounded by mountains. The temperature in the summer months can reach up to around 40°C on average every day and in the winter months the temperatures can drop down to as little as -8°C, along with considerable snowfall.

The city is home to numerous different museums, art galleries and libraries adding to the city’s title as cultural capital of the country. The most important and prominent museum in the city is the National Gallery of Armenia, some of the other important and interesting museums in the city include the History Museum of Armenia, the Cafesjian Museum of Art, the Matenadaran library of ancient manuscripts and the Armenian Genocide Museum. There are also numerous galleries within the city and many more are continuing to open every year.

The city houses many cinema halls and among them is the famous Moscow Cinema, which was constructed on the site of the St. Paul and Peter Church which was demolished in the 1930’s by the Soviet authorities. Starting in 2004 the Moscow Cinema has been host to the annual Golden Apricot international film festival, which celebrates the new works of film producers and directors in the country.

The city of Yerevan has become a very popular tourist destination and is home to many luxury hotels, modern bars and restaurants as well as exciting pubs and nightclubs. The Zvartnots International Airport, which serves the city, has undergone several renovation projects to better cope with the growing number of tourists visiting the city every year. Car rental is one of the most popular ways to get around the city, and can be organised to be picked up at the airport when your flight lands.

Rentalcargroup.com compares car rental prices for Yerevan Airport). We work with many car rental companies so the quality of the cars is guaranteed. This way you will be sure to get a rental car that suits you the best and for a competitive price.

A valid driving license in the name of the main driver and additional drivers is required, held for a minimum year requirement. An International License is also required, along with your own home license if you are renting out of the country where your home license was issued. Please always check in your own country for full details and requirements on where to obtain one. Also a credit card in the name of the main driver is needed when you want to rent a car.

My flight arrives at midnight. Are there still car rental agents open then?

For most locations it is possible to take a rental car out of office hours. When making a booking you can select the pick up time. If the pick up time is after opening hours, please check if there is an out of hours fee applicable. This fee must be paid on arrival directly to the car rental company. You can find the information in the detailed terms and conditions.

When traveling with family and children, we recommend you select a car with enough space for luggage and enough space to fit child seats. Children must travel save in a child seat/booster depending on their weight or how tall they are. Rentalcargroup.com offers a wide range of variety of station wagons, mini vans in Yerevan Airport.

See below last 5 customer reviews. Our customers rated Yerevan Car Rental with an average of 6 based on 10 ratings.